We use cookies and similar technologies (also from third parties) to collect your device and browser information for a better understanding on how you use our online offerings. This enables us to optimize and personalize your experience with Infineon and to provide you with additional services and information based on your individual profile. Details are available in our privacy policy.
Privacy Policyand Imprint
View and change cookie settings
Reject

Sign In Help
Turn on suggestions
Auto-suggest helps you quickly narrow down your search results by suggesting possible matches as you type.
Showing results for
Search instead for
Did you mean:

I decided to make a small "facelift" and change KitProg2 into KP3.

Thanks to clear instructions, additionally supported with community posts I went to KP3 smoothly.

To be precise I decided to upgrade KP to the most recent release, using quite handy fw-loader.

But here I encountered some issues/ surprises...

The first, most funny is the message from PSoC programmer: 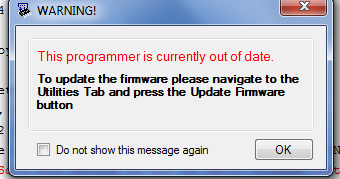 and... my bad luck - I had auto-upgrade selected thus my "hard work" with obtaining most current version was lost...

forced me to the second attempt...

As I wrote above: only selected, some .hex were accepted, remaining rejected...

These binaries came from tested, successful build and were accepted when programing directly from PSoC Creator or WICED

I'm afraid I need some fine-tuning around DapLink driver etc. but presently no idea what to fix...

really... why? the kit is quite fresh!

If you have some thoughts in that matter(s) I will be grateful!

I tested the "Drag-and-Drop Programming" feature of DAPLink mode just now, and found that the hex files generated by PSoC Creator are invalid to be used under DAPLink mode.

You have to use mbed to generate the required hex files. I guess there are some differences between the file formats.

Maybe you can try the latest PSoC Programmer 3.28 - https://www.cypress.com/products/psoc-programming-solutions

As for the programming under DAPLink mode, is your programming tool the PSoC Programmer? How did you generate the hex file, using PSoC Creator?

You can just ignore the "last issue" you encountered, which is relevant to the flash boot version. It actually doesn't matter at all.

Thanks for quick response!

I belive my programmer is brand new

I don't understand the question:

"As for the programming under DAPLink mode, is your programming tool the PSoC Programmer?"

But generally speaking, I confirm, I use PSoC Programmer (3.28)

/as well as Wiced projects./

the "company": PSoC Programmer+ PSoC Creator + my .hex files in my opinion seems to be correct

I suppose we should focus on PSoC board+DapLink when looking for the solution.

I tested the "Drag-and-Drop Programming" feature of DAPLink mode just now, and found that the hex files generated by PSoC Creator are invalid to be used under DAPLink mode.

You have to use mbed to generate the required hex files. I guess there are some differences between the file formats.

Thank you for your involvement and instructions.

...plenty of tools, serious changes in functionality in new versions...

Nevertheless I see that "Cypress Programmer" is still alive and some instructions/ examples basis on it...

Now I hear about "ModusToolbox" as the leading tool and successor of all above...

And additionally It seems the Mbed OS is required… what else?

I'm directing it to the Cypress Support:

Could you recommend the best tools/ solution to enslave that matter.

My learning curve basis mostly on good examples, could you recommend me some good examples for particularly PSoC6 WiFi BT Kit.

I'm honestly disappointed that many BT examples I wanted to use/ learn/ modify, are dedicated to the BLE kit only!