Question: How do I increase the output power of the Switch Mode Pump (SMP) in PSoC 1? 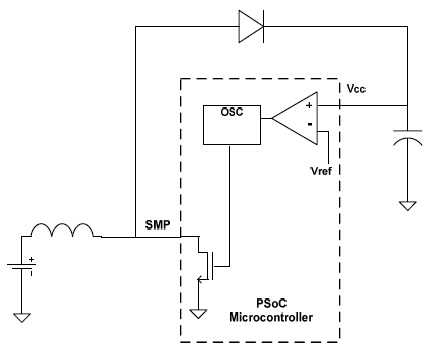 In many applications like LED drivers, wireless transmitters, etc., there may be a requirement for higher current from the boost converter. This can be achieved by using an external MOSFET switch with higher drain current. Figure 2 shows the block diagram of this setup.

The PSoC SMP operates at 1.3 MHz, 50 percent duty cycle. Regulation of the output voltage is achieved by turning on or off the gate drive (not by pulse width modulation). For a continuous mode-switching converter, the following equation determines the output voltage.

From this equation, it is clear that for a 50 percent duty cycle, the maximum output voltage that can be achieved is twice the input voltage, which is not enough. A higher step up ratio can be achieved by the following technique. R3 in Figure 3 is chosen such that the rising edge of the SMP pin is slowed down due to the input capacitance of the inverter U1 and the output capacitance of the SMP pin. This in turn results in a higher duty cycle. Figure 4 shows the waveforms of the SMP pin and the drain of the external MOSFET switch.

Figure 4. Waveforms at SMP Pin and Drain of External MOSFET 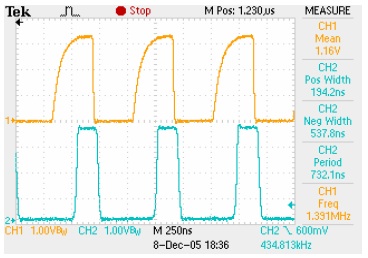 Due to the slow rising edge of the SMP pin, the effective duty cycle now is about 70 percent. With 70 percent duty cycle, the step up ratio now can be as high as 3.33.

With the circuit shown in Figure 3, following performance numbers were achieved.

Thus, with a higher rated external MOSFET switch, an inverter and higher rated inductor and diode, the PSoC 1 Switch Mode Pump can be modified to provide a higher current output of up to 0.5 A.